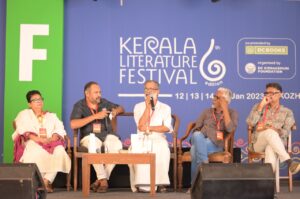 The session began by introducing Satyajit Ray as the Bengali motion-picture director, writer, and illustrator who brought Indian cinema to world recognition.
I Shanmugadas delivered a speech about the features of Satyajit Ray’s films, where he said that his films were mostly adapted from famous novels, but it was his capacity for making the films that made him fabulous. And Shanmugadas further explained the techniques of Satyajit Ray, and he added that “the best technique of filmmaking is the one that is not noticeable.”
C S Venkiteswaran, film critic, said Ray’s films went through a complicated period of Indian culture and independence. He also added that Ray is an anarchist. Deedi Damodaran, the famous Indian screenwriter, spoke about the patriarchal hegemony in Ray’s film by taking ‘Jaya Jaya Jaya Ho’ as an example. In the film `Charu Latha,` she says it ended up with a patriarchal tone. She also mentioned the lower participation of women in Indian politics. On the other hand, Premchand partially criticises Satyajit Ray. He slightly mocked Ray by saying he is a shallow filmmaker and his films only speak about the different perspectives of Dalits.
The session concluded by saying “discussion makes us aware of the demerits and merits of Satyajit Ray, who is a fabulous writer and director.”
Share

The History of the Deccan Recounting Indian History is Comparable to France and Germany Telling the History of Europe: Anirudh Kanisetti